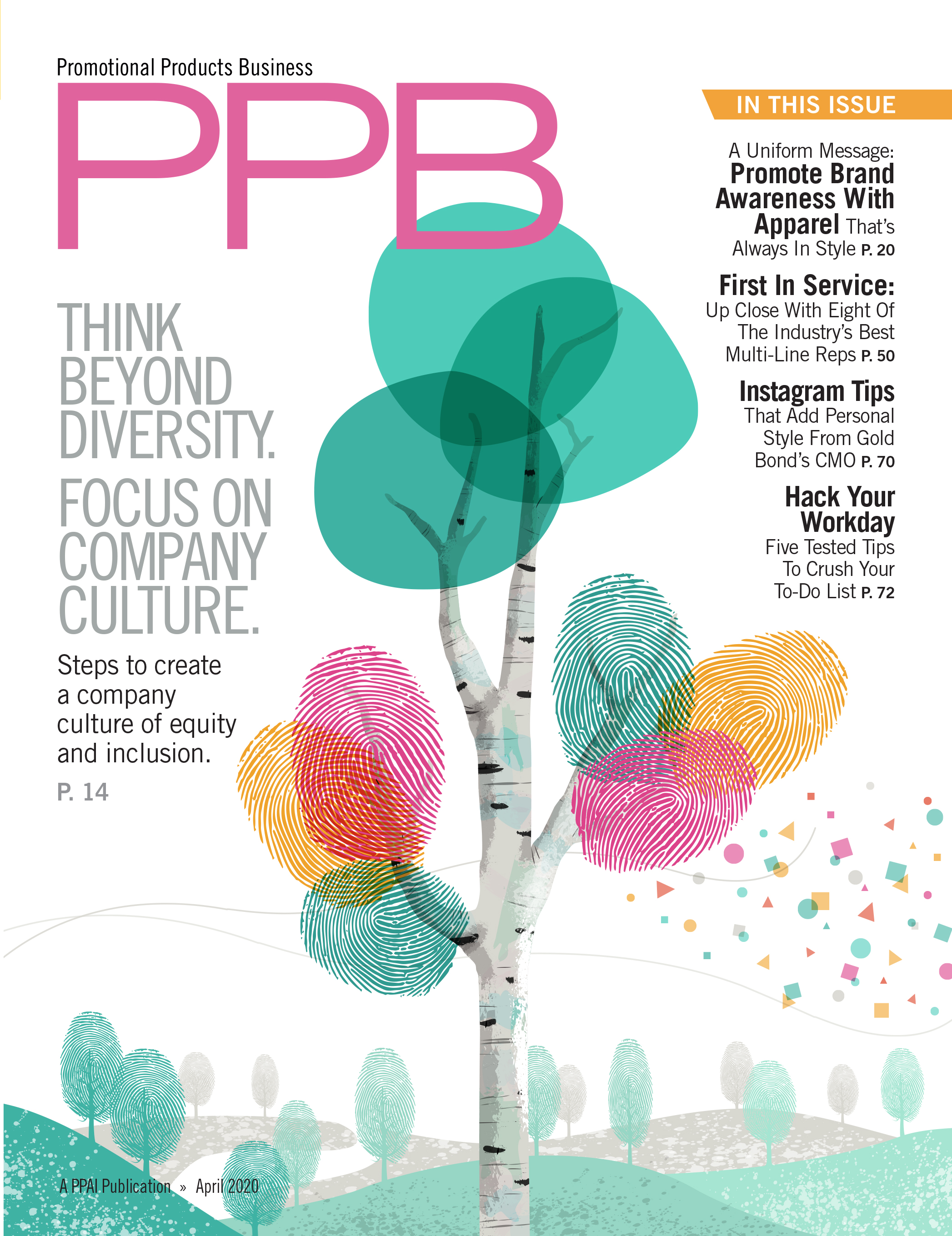 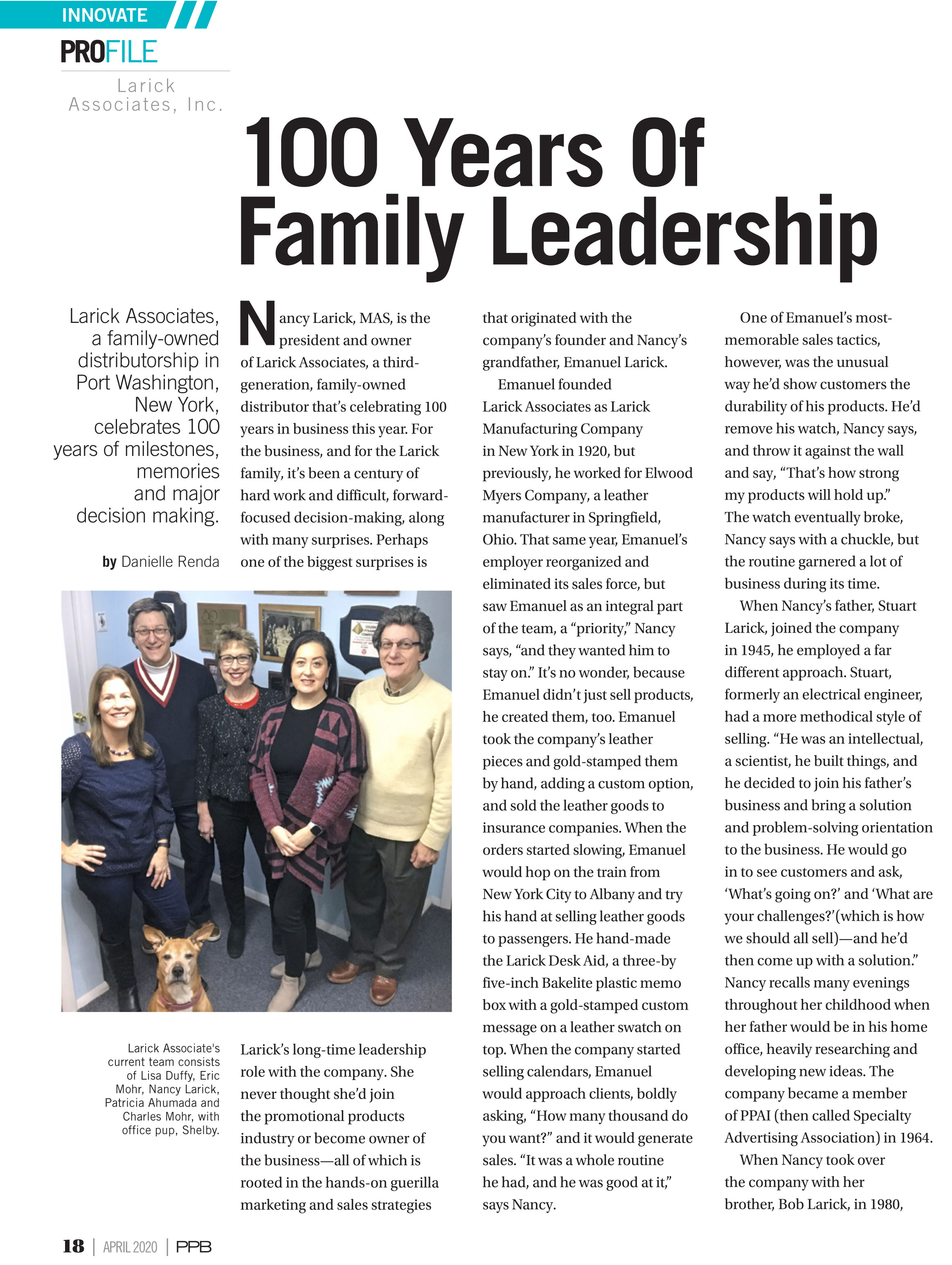 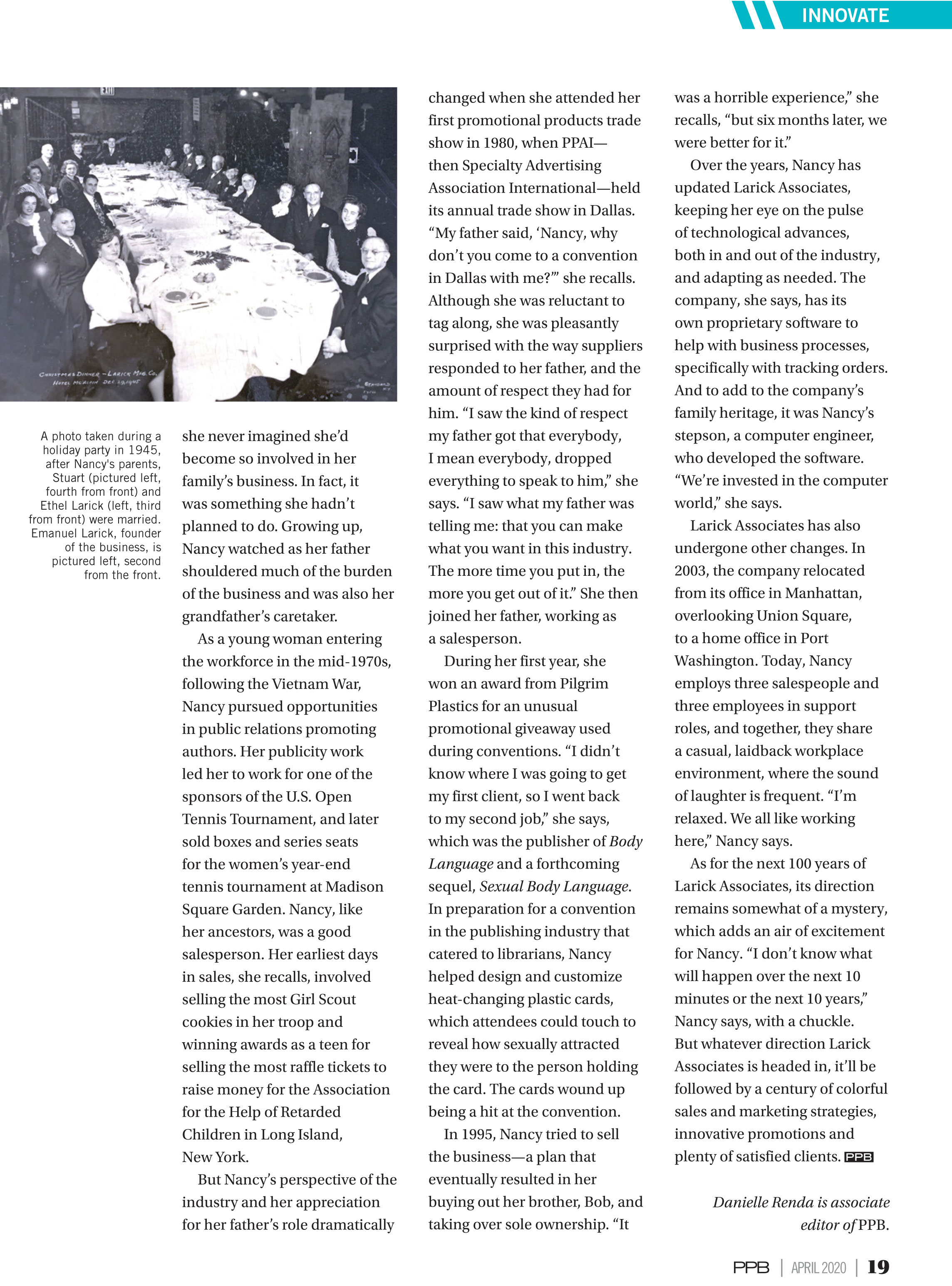 The Laricks: Integrity For Three Generations

In 1920, when Emanuel Larick founded the Larick Manufacturing Company in New York City, he probably never would have imagined that there would be a granddaughter one day carrying on his company's tradition of honesty, integrity and creativity-but there is. Nancy Larick, MAS, president/owner of Larick Associates, Inc. (UPIC: LARICK), is the third generation of Laricks to work successfully in the promotional products industry.

Nancy says, "Since there was not much to sell, my grandfather literally had to create items. Another such item was the Larick Desk Aid, a three- by five-inch molded Bakelite plastic memo box. He gold stamped ad copy on a leather swatch and glued it to the top of the box. He told me, 'I remember selling those memo boxes with many novel twists so I could offer them as important parts of real advertising programs.'" Another of Emanuel's big sellers was the Larick Insurance Policy or Important Papers Wallet. This holder for valuable papers was made of solohyde, a material made by grinding up leather scraps, mulching them into a pulp and then rolling this into thin sheets.

Nancy describes her grandfather as a real character who was really good at convincing customers about the strength of his products. "In customers' offices, he would throw a watch against the wall and say, 'See how strong that watch is and how it holds up? Well, that's how my products will hold up,'" she says.

An electrical engineer by training, Stuart (Stu) Larick worked for Bendix Radio during the war, but, in 1945, he decided to join his father in the business, and the company name was changed to Larick Associates, Inc. Stu always used his introspective nature and his researching and probing skills in his career as a salesperson. "He found out exactly what his customers' problems were and helped them find solutions. He was definitely a problem-solver," says daughter Nancy.

Stu claimed to have sold the first-ever item to a drug company (silver knives to Pfizer) as well as the first ad specialty to a magazine—cigarette lighters with Shirley McLaine's picture floating in the lighter fluid to Life magazine.

In 1980, Stu Larick took his son Bob and daughter Nancy to the then-SAAI show in Dallas. "We saw a side of our father we had never seen before. People were dropping what they were doing to talk with him," says Nancy. "His peers showed him a lot of respect. We began to see him in a much higher light. He no longer was just Dad but a well-liked, highly respected businessman who was also a smart negotiator."

So impressed were they that Bob, who had a financial background as an accountant, and Nancy, who was an experienced publicist, joined their father's business as salespeople. In 1995, Nancy bought out Bob's share of the business and is the remaining third-generation Larick.

Early on, it was clear that Nancy was a natural at sales. She sold Girl Scout cookies as a child and won awards as a teenager by selling the most raffle tickets to raise money for the Association for the Help of Retarded Children (AHRC) in Nassau County, New York. As a result, it was certainly no surprise when she decided to go into sales after graduating from Washington University in St. Louis, Missouri. Nancy went to New York and got a job with Golden Books, Western Publishing, about which she says, "Getting into children's books was the most politically correct thing to do at that time-according to my brain."

After this, Larick became a publicist, an advocate for the authors she represented. "This publicity position segued into real sales where I did the publicity for the U.S. Open Tennis Tournament and began working for Madison Square Gardens selling corporate boxes and program ads," she says.

When Larick attended that trade show in 1980 and saw people vying for her father's attention, her whole attitude about his business changed. "My father introduced me to several men, who were interesting and smart as well as passionate and creative about their businesses," she says. "I remember thinking, 'This really is a creative industry. I can call on the customers I want, and I can make this business into whatever I want.' These were things my father had been telling me all through the years-but I kept turning a deaf ear."

"When I joined my father's business, however, I did it very tentatively because I just wanted to give it a try-and I thought if I didn't like it, I could go elsewhere," she says. "And, at that time, the last thing I ever wanted to do was run the business. Lo and behold, how things have changed!"

Larick says she and her brother were challenged to keep the business going when her mother became ill and her father left to take care of her until she died in 1985. "Physically, he totally dropped out of the business, but he did call in a lot. Then my father was ill for three years before he died in 1993. We did a good job of keeping things running."

Facing the last two year's down economy has created a sales challenge for Larick's business. "So much of my business has been media and Wall Street, and when those areas are affected economically, I am affected. But this has made me work harder. I stay in touch with my customers by calling them and e-mailing them ideas. If I think something will represent a company well and bring more customers and prestige, I will communicate this information to the company," she says.

With so many more distributors in the promotional products industry and so many businesses downsizing, Larick says another challenge is not to become a seller of commodities. "I must be a creative force and a member of my customer's team rather than just a supplier of promotional products," she says. "I want my customers to talk and brainstorm with me. I want them to know I am an expert at what I do and view me as a problem-solver."

The Larick sales team today also includes Paul Schustel who joined the company in the '60s and Carol Stevenson who came on board in the late '80s. "We are not flighty people but are dead serious about what we do; yet we have a sense of humor that we try to maintain," she says. "We feel this is a personal business and believe we have much more to offer than customers will ever find by going to the Internet."

Larick says her customers think she is smart, creative and persevering. "Many have told me that I consistently come up with really good ideas and they like working with me. And you just know there's a chemistry there when you realize you're doing your best work for clients that appreciate you. Customer service, constant communication with both the supplier and the customer and client follow-up are necessary for success," she says.

Even though Larick Associates may be small, it is strong. "We have very strong attachments and relationships with our clients. They know we are working with them for their benefit-and because of this, they come back to us," says Larick. "My grandfather used to always say the most important thing for a salesperson is honesty, and my father was always great on communicating. I believe these traits have definitely passed on to me from them."

And that's the way the Laricks have been for 83 years-with integrity, communication, determination, perseverance and creativity making each generation successful in its own way.

Anne Pechuls is an associate editor for PPB.